TREES DON'T TRAVEL are a 5 piece band based in and around Aberfeldy and Dunkeld, in Highland Perthshire Scotland.

Formed in 2013, their original songs tell tales of imaginary train journeys to lives lost in a tequila haze; on love, loss and redemption; on the certainty of actions, consequence and fate. Most of all though, it's songs they just love to play. Their unique sound is variously described as Big Tree Country Bluegrass Americana....

Debut album ‘Rooted’ is out on CD and digital platforms, with 13 original songs. A second album, 'Flood', is just completed and is now released on CD and most digital platforms, iTunes, Spotify, etc. Over the last few years they have appeared at festivals such as Belladrum, Southern Fried, Edinburgh Fringe, March into Pitlochry and Tummel & Tay, and appeared on the STV Riverside Show. They have played concerts with amongst others, Woody Pines, Hannah Aldridge, The Furrow Collective, Ewan McLennan, The Lost Highway Ensemble, Hot Tin Roof, The Jellyman's’s Daughter,The Bevvy Sisters, Foy Vance, Cera Impala, Lake Montgomery, Mike Silver, Underhill Rose, Brooks Williams, Dean Owens, The Black Feathers and Santo Color. They regularly play gigs around Scotland from Inverness to Edinburgh, and played a short Holland tour in 2017. 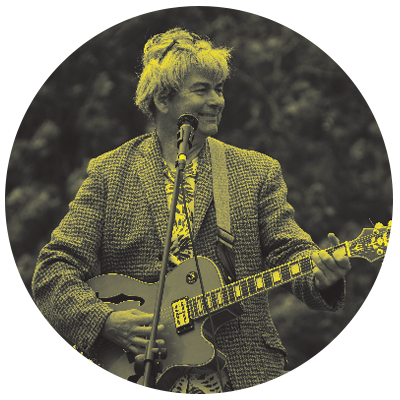 Gold is his favourite colour. The number one his lucky number. He is a Taurean with the moon in Uranus.

Shipwrecked on a remote south pacific island as a baby after a violent storm had taken both the yacht he was travelling on and his parents, he was raised by a friendly pod of dolphins as one of their own. He was not to see another human for twenty five years, until rescued by a passing scientific research vessel.

The return to civilisation was a trying, traumatic and confusing time, but through introspection and meditation techniques he found peace, and was eventually able to express himself through the medium of music. This journey of reconciliation with his past continues to this day. It is said his grip on reality is becoming firmer.

Plays the drums, has played since he was big enough to sit on a drum stool. Is now big enough to wield an axe and make decent coffee, but not at the same time – he's learnt that lesson.

Went missing in Glen Lyon once but was eventually found in a very small car. Can speak to animals and is good with police officers. 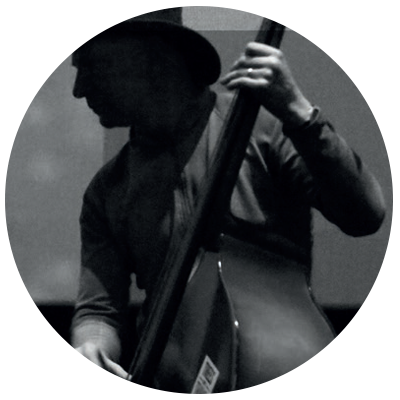 Plays double bass, still learning double bass. Does other stuff. Loves renewable energy. Used to do politics. Still does, after a fashion. Same with woodwork. Lives in Dunkeld. From Edinburgh originally. Played electric bass in bands when young(er), Ink of Infidels, Archbishop Kebab. Influenced by tonnes of all sorts of music that he likes - everything from jazz and country to punk and folk passing by ska, reggae and anything with heavy bass and drums along the way.

Can only take blues for very short periods due to a bad experience when he was a child. Favourite bass player: Jah Wobble. Favourite drummer: James Smith! 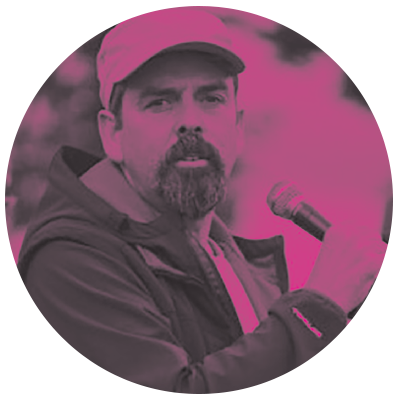 Originally from Glasgow, has lived in London and Lincolnshire and Highland Perthshire for the past 8 years. Constantly appreciates the great community there. Music always been a deep influence. Anything from Robert Johnston to Sinatra, Hendrix to Joni Mitchell, Floyd to the Bonzos, Johnny Cash to Peter Green, Dylan to Pierre Bensusan with loads of others along the way.

Began dreaming about guitars when was about 12 and haven't stopped since. Brain malfunctions on philosophy that can never have too many guitars or bicycles although tries unsuccessfully to maintain a one in one out approach. Can't imagine life without a dog - preferably two.

Our latest live dates/events will appear here when confirmed...

10th May The Taybank Dunkeld  9.00pm one of our favourite places to play

25th May  Food in The Park - Blair Atholl  8.00pm - it's the Blair Atholl Highland Games - should be a cracker

27th July  Inn on the Tay  Grandtully  9.00pm  - outdoors in the open marquee on the decking overlooking the rapids - on with the Avon

31st August The Taybank Dunkeld 7.00pm - outdoor/indoors depending on weather. Big Tay Out

2nd November The Weem Inn 8.30 with The Bevvy Sisters - we love the Bevvys

1st September The Weem Inn 8.30pm with the super talented Brooks Williams and all the way from Mexico - Santo Color

25th August The Taybank, Dunkeld 5.00pm Outside if the weather's good

12th November The Weem Inn 7.30pm Supporting Mike Silver with an acoustic set of songs from our last two albums.

2nd June The Weem Inn 9.00pm with The Bevvy Sisters

6th May The Taybank Dunkeld 9pm

17th March The Weem Inn 8.30pm with The Jellyman's Daughter

28th October The Weem Inn 8.30pm with The Furrow Collective

21st October The Weem Inn 8.30pm with Hannah Aldridge and The Black Feathers