Idea.
The idea is to have a portable PA for the band, one that sits on a wheeled cart, super busking, so we can take the component parts out of a car's boot, assemble it, and be able to wheel it around a town, city, hill, park, beach, infact anywhere, plug in and play. All entirely self contained, no external power required. This way, we can take our music to the people, there will be no hiding. Guerrilla music... 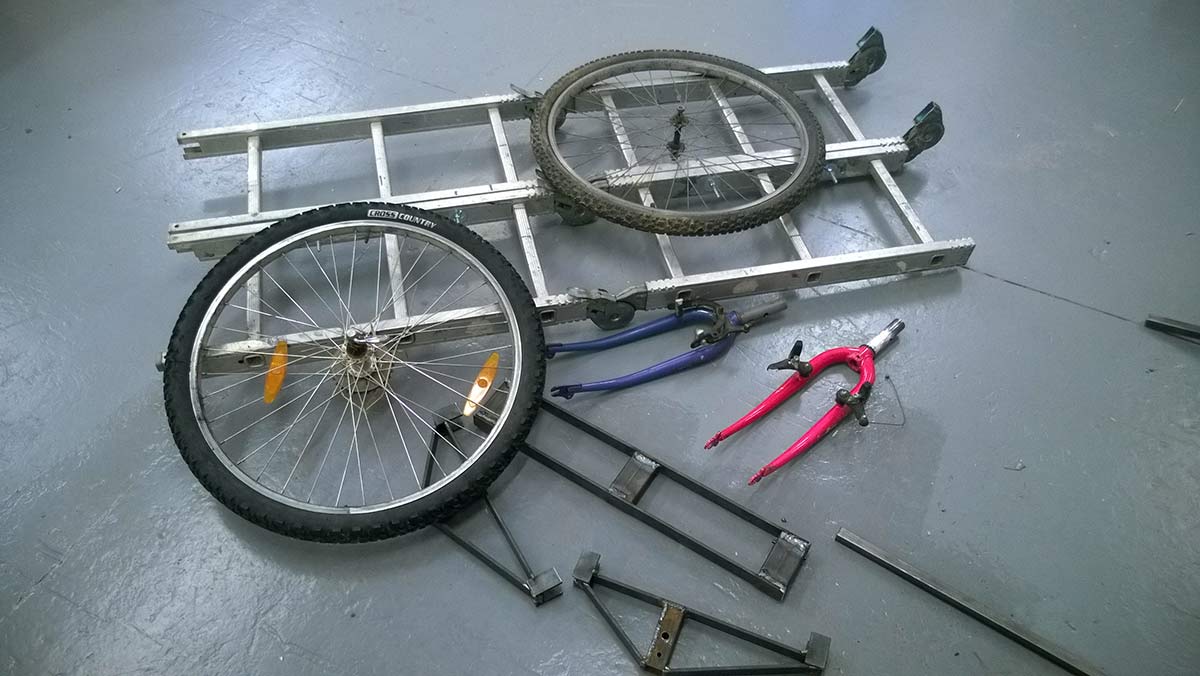 The folding ladder that was no longer suitable for building work, so was donated to this good cause. It was cut in half and bolted side by side.

A small subframe was fabricated by the local community workshop, along with the attachment points for two bicycle front forks salvaged from the local tip. Stabilisation points front and rear were added for when stationary. 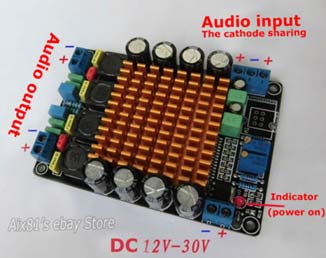 Amplification.
Efficiency is the name of the game, with limited power available we need to waste as little as possible. Also the more efficient it is, the less heating/heat dissipation problems we have.

To this end i focused on the 'T' class amplifiers, which are switching class D amps. 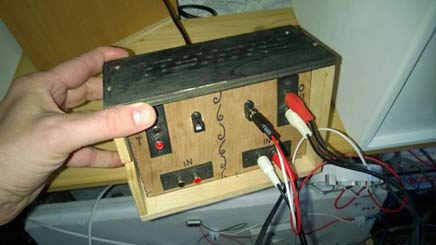 So I went for the tk2050 and decided to use a three way crossover and have bass, mid and tweeters.

Now you may think 50w is a bit light, but a couple of points, this is not a full on hall filling PA, it's band super busking. With efficient speakers it still kicks out a lot of sound. I may try bridging the channels if we need more...

So, I bought two of these boards from HK, about 11 pounds each. Two for resilience , and maybe bridging.

I popped them in a box and this is it. Homemade shabby chic. Or maybe just shabby. La freak.

Speakers.
Now this is a cheap build, but speakers really make a difference. So, i spent a bit of money but i also got lucky. I bought celestion 8 inch 100w tf0818, at 95db they're pretty good, range 70 - 6kh. Also got compression tweeters, and then got lucky when a recycling man i know said three old celestion 12kt-100 inch speakers had been handed in.

They sounded and great, and with a bit of digging and help from 'Dr Decibel' at Celestion i got the tech specs for them. 50 - 6khz and 97db. wahoo!!

Cabinets... well, what a rabbit hole that is to fall into. After flights of fancy about T line cabs,fibre glass composites and the like, I went all traditional.

A box for each speaker, tweeters don't matter, a simple ported mid range, and semi open backed bass cab. With the space limitation on the cart, and with the benefit of the tech specs any sealed cab for the 12 inchers would have been way too big.

And then the crossovers. Again, worth spending a bit, but with our friends in china it really wasn't too painful. Seems to cut over nicely on the speaker ranges.

So, I kept the crossover as an external box, each one having one input, three outputs. The speakers are all boxed separately, so it's easy to swap things around if we want another configuration or if something breaks.

And with my quality woodworking skills it looks like this: 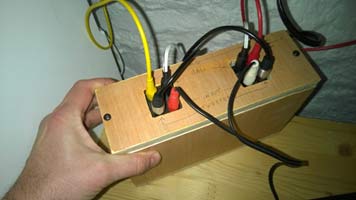 And it all plugs into the speakers, which George with his superior woodworking skills made: 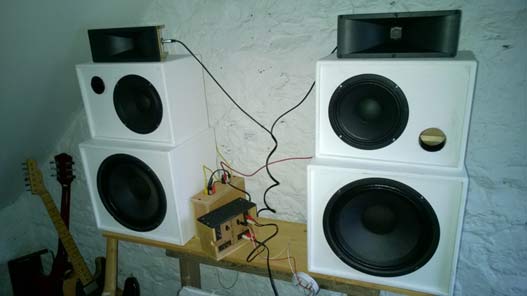 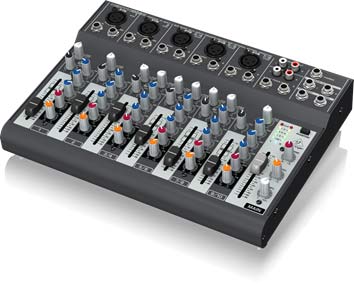 Inputs and mixing.
With a minimum of seven inputs we need a mixer. Beyond my ability and time constraints to build anything, so are there any multi channel battery powered mixers? The only one i could find is the Behringer 1002B.

So i bit the bullet and bought one. About 80 pounds, but it seems pretty good. It mixes and acts as a preamp for the amp.

It runs off mains or two 9v batteries. Now they run out fairly quickly and for simplicity I'd like to run it off the main power box for the gig cart.

Power.
But what powers it all i hear you ask. Well, underneath the Frame is suspended the power unit, housing 2 12volt batteries connected in series to deliver 24v of power. 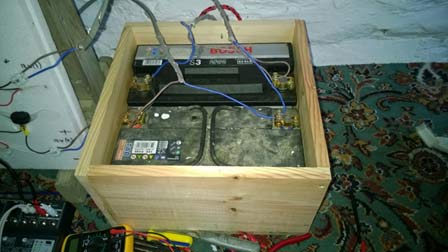 A phase two will be to have two 50w solar panels on top and have it solar powered.

This feeds into the control unit, where the switching , voltage stepdown and monitoring is done. 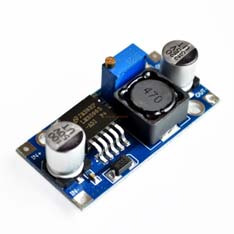 Control Unit.
The control unit is being laid out to take one 24v and two 12v feeds from the power box.

The two 12v feed are stepped down to 9v for the mixer.

Step down is achieved using DC DC switching adjustable step down converters. These can run up to 92% efficiency - just what we need.

It is planned to have two parallel 9v feed for effects pedals.

Voltmeters will be added to the panel to monitor output voltages.

Different plugs will be used for the different voltages to ensure no silly mistakes.

Current Status.
Well, it's all been plugged together and seems to work. hooray. we now need to productionise it.

The cart itself is nearly finished, just final tweeking needed.

The control panel is working, but needs to be put in a robust box for live use.

Wiring and plug connections need to be standardised, so it's all intuitive, easy and not prone to connection errors.

Need to put metal grills on the speakers for protection.

Need to work out how to stack the kit and guitars on the cart so it's safe and stable.

Need to work out a drum solution - there must be lots of cheap unwanted and unused electronic drum kits out there, i just need to find one and hack around with it so it's powered off the cart, plugs into the PA and maybe attaches to the cart so when we play it just folds down and it's ready. At least that's what I'm hoping.

Big thanks and credit to Jennifer Firmenich from Switzerland who took excellent photographs of us at last years Aberfeldy Highland Games and for allowing us to use some of them on our CD internal cover.  Jennifer's work can be seen at https://www.flickr.com/#/photos/133187873@N07   Thanks again Jennifer!